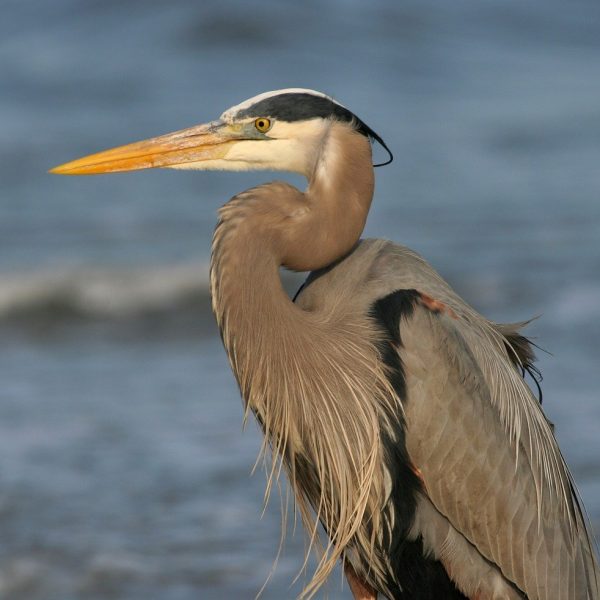 1.  Are whales fish or mammals?

2.  Are sperm whales more closely related to sharks or dolphins?

3.  What has a larger brain…a human or a sperm whale?

Whales breathe air, are warm-blooded and nurse their young, therefore; they are mammals.

Whales belong to a group of marine mammals known as cetaceans.  Sperm whales are “toothed” whales as are dolphins and porpoises.  Sharks are cartilaginous fish (skeleton composed of cartilage rather than bone). Most large whales instead of teeth have “baleen” plates, composed of bristles and hairs, that hang from the upper jaw and filter plankton and krill that they consume.  The largest whale, the blue whale, measures 100 feet and weighs 220 tons.  The blue whale is a baleen whale.

Sperm whales eat about 2,000 lbs. of food each day.  They need that much food since they weigh from 15 tons (females) up to 45 tons (males) with a length between 40 ft. (females) to 52 ft. (males).  They eat mostly large squid, but also large bony fish and sharks.  Their bodies are enveloped in a layer of blubber that aids in buoyancy, preserves body heat and (just like a beaver’s tail) serves as a source of stored energy.

They can dive as deep as 1.2 miles, in a matter of minutes in the hunt for food.  Their average dive lasts 45 minutes to an hour, but can remain underwater for two hours. Can you imagine holding your breath for that long??  Their normal “cruising speed” is 3-9 miles per hour (mph), but they can swim 22-28 mph for about an hour.

The sperm whale has the largest brain of any animal on the planet.  Their long, block-shaped head comprise 1/3 of the whole body.   Sperm whales make the loudest animal caused sounds in the world.  A single click of a sperm whale equaled the sound of a Saturn V rocket at three feet away.   Clicks are used in communication and like bats in echolocation.  They have the most powerful sonar of any animal and they use it to focus on prey in the deep, dark oceans.  Their sonar organ is called a “melon”.  Similar to your cell phone where you have “ringtones” that you can use to identify your friends, sperm whales use different clicking sounds (codas) to identify individual whales.

Sperm whales live in every ocean in the world.  Some do migrate, but their migration is not as predictable or understood as for baleen whales.  In tropical and temperate regions there is no obvious seasonal migration.

Females (cows) give birth to a single calf.  A baby sperm whale is 13 ft. long and are produced once every 5-7 years.  Females and their offspring gather into “pods” of 12-20 members.  The females form lasting relationships (matriarchal pods) so they can help each other watch over the young while they dive for food.  Young males also form pods known as “bachelor herds”, but these break up as they age.  Whales protect each other from attack by surrounding the vulnerable pod member with their tails facing outward.

Sperm whales are named for the spermaceti, found only in the head of sperm whales and used in echolocation. Spermaceti was used in oil lamps, lubricants and candles.

Today sperm whales are protected, but 150 years of commercial whaling cut their numbers in half.  At its peak in 1864, the American fleet consisted of 2,700 vessels.  Sperm whale oil was some of the highest quality and volume per whale of any species.  Whale oil provided the major source of lighting for Americans until late in 19th century when kerosene began to be used in lamps and machine lubricants were made from minerals or oil found underground.

Also hunted for ambergris, a waxy substance found in the digestive system.  It forms around the sharp squid beaks to protect the whale’s internal organs, and was used in making perfume.  (Today, ambergris can be found floating in the oceans, some believe it passes along with fecal material.)

The first whaling ship to leave New London, the Commerce, departed from port in 1764 and returned 4 years later with a full cargo of oil.  Beginning in 1841, Charles W. Morgan began hunting whales and continued to do so for 80 years.  Thirty-seven voyages took him all over the globe.  (The Morgan, named for him, is the last surviving wooden whaling ship.  It is docked at the Mystic Seaport.)

“There she blows” was heard high among the ship’s mast when a whale was spotted.  The sperm whale has an “S” shaped blow hole located far forward and to the left of the head.  Just before or as they are to break the surface of the water they expel warm, moist air from their lungs out the blow hole.

In 1851 Herman  Melville wrote Moby Dick about Captain Ahab’s search for the infamous white whale.  The story was based on two real sperm whales – a whale that rammed and sank the ship Essex and an albino adult male named Mocha Dick.

Sperm whales can live 60-70 years.  Although whaling has all but ceased thanks to the Marine Mammal Protection Act and the Endangered Species Act they still face threats from vessel strikes, entanglement in fishing gear, noise in the ocean, exposure to pollution, climate change, marine debris. Connecticut designated the sperm whale as the state animal in 1975 for two reasons – “the connection to our state history and because it is an endangered species”.  According to National Oceanic and Atmospheric Administration (NOAA) there is no exact accounting of the total number of sperm whales, best estimate is 300,000 to 450,000 worldwide.

The Miracle of Connecticut by Ellsworth S. Grant