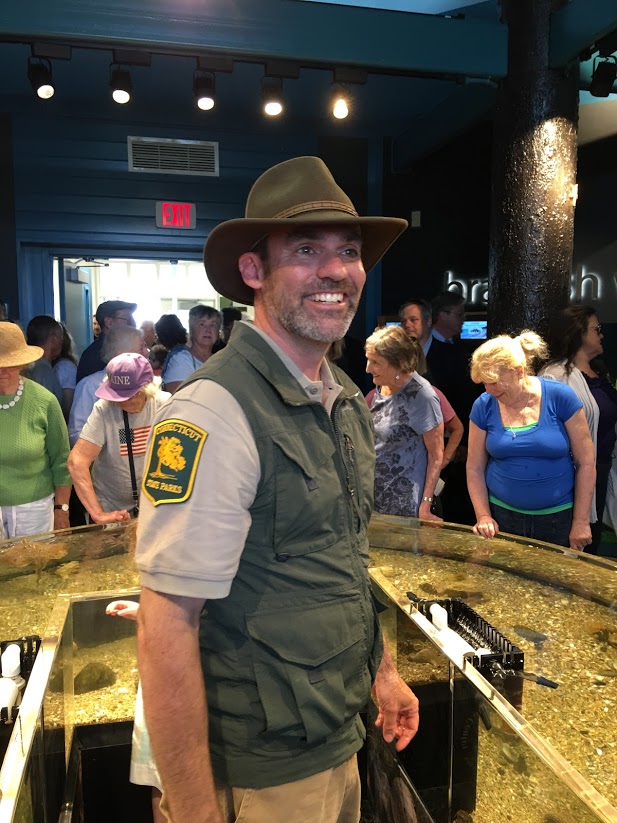 Ranger Russ’ formal education began in Ledyard High School with FFA and the vocational agriculture program. He then received an associates degree from Northwestern Connecticut Community College in Park and Recreation Management. Later, he received a bachelors degree in biology from Eastern Connecticut State University. He has worked for the D.E.E.P. since the winter of 1988. And has worked as an environmental educator with the department since 1995, beginning at the Rocky Neck Nature Center until 2001 when he took over as the director of the Meigs Point Nature Center. Which became a year round facility in 2005. In 2016 a new MPNC building was opened Russ was instrumental in the design and development of this latest addition.

Throughout his time with the Department he has taken on the sometimes thankless (but nevertheless essential) task of bringing high-quality environmental education to millions of school children and park visitors – both at the Nature Center and on-location at schools, fairs and various special events.

The Meigs Point Nature Center is a popular field trip destination for Connecticut public school groups. Russ has developed a wide array of programs for teachers to choose from – all of which meet the curriculum standards of the state Department of Education. He is also able to tailor a program to the age group of the class, so that it will be appropriately challenging and informative regardless of whether he is teaching a class of third graders or high school seniors. The programs that Russ has developed require active participation by students. This may involve identification of plants in the salt marsh preserve, collection of marine organisms by seine net on the beach, or observation of Connecticut’s native reptile species with a “hands-on” presentation.

Russ is constantly looking for new ways to plant the seeds of environmental awareness in the minds of young and old alike. He has developed a successful traveling program, made possible by the Friends of Hammonasset’s donation of a brightly-illustrated van and trailer that bring additional attention to the Meigs Point Nature Center. This has allowed him to bring selected programs to school groups that are unable, for financial or logistical reasons, to visit the Nature Center.

Russ is constantly on the look-out for ways to improve the Nature Center and its programs. He has added several evening programs, such as an owl prowl, star gazing, and bat program, to the Nature Center schedule. He has also added winter programs such as seal watches and fireside storytelling to attract visitors during what was once a relatively inactive time of year.

The seasonal Nature Center employees learn a lot from Russ, and most return to work here for several seasons. Each employee is responsible for conducting programs throughout the season, and they value the experience and Russ’s training. Many have gone on to pursue careers in the sciences or education.

Russ is the park’s primary liaison with the Friends of Hammonasset, and has close working relationships with nature conservancy groups such as A Place Called Hope (bird-of-prey rehabilitation), the Menunkatuck Audubon Society, and the Connecticut Outdoor and Environmental Education Association.

Russ never has a bad day and works tirelessly to impart his enthusiasm for nature and the environment to others. This enthusiasm is contagious and spurs others to continue to speak on behalf of the animals, plants and ecosystems that depend on our stewardship.

He conducts a marsh clean-up in the spring in which he leads a group of volunteers in clearing out the floating debris that has ended up in the marshes over the winter. He then uses the pile of debris as a visible teaching tool to demonstrate the consequences of littering and pollution.

Russ has organized and carried out at least four events to tackle invasive plant removal at Hammonasset. Through his efforts hundreds of volunteers have learned to identify and erradicate dense pockets of invasive plant species over acres of land that our limited maintenance staff would never have the time or resources to tackle.

Volunteers and donations allow Russ to supplement the limited state funding and staffing available to the Nature Center. He trains volunteer docents to conduct several of the more popular programs in the off-season, and to answer questions and act as “greeters”, which allows him to keep the Nature Center open to the public on days when he has large school groups scheduled, or when he is off-site conducting a traveling program.

The popularity of the Meigs Point Nature Center as a field trip destination means that there are often hundreds of students attending programs at one time. Because the Nature Center has a small staff, Russ has developed a system that allows all of the students to be actively participating in some educational activity, while keeping group sizes to manageable levels. Large classes are divided into smaller groups, and the groups cycle through a series of programs and activities. He has designed projects and activities that can be overseen by the teachers and chaperons that keep the students focused and engaged while he and the rest of the Nature Center staff conduct their scheduled programs.

Special Thanks from Ranger Russ

Mr. Waters, my fifth through eighth grade teacher, recognized my love of nature and used it to motivate me to do better in school. He also taught me things that I would later hear in college courses. Ms. Roy, my high school Vo-Ag teacher, gave me my first opportunity to teach others and set me on a path to environmental education. Professor Elliot, of Eastern Connecticut State University, encouraged my enthusiasm. Professor Booth, also of E.C.S.U., led me to pay close attention to detail in every aspect of my college, career and life. Roger Kinderman, former Park Supervisor of Hammonasset Beach State Park, mentored me in a friendly and outgoing style of management and made me the director I am today. Finally, Marcy Klattenberg and the Friends of Hammonasset, who gave me the year round opportunity to create a Nature Center that I am proud of.